What to know before you take engagement photos 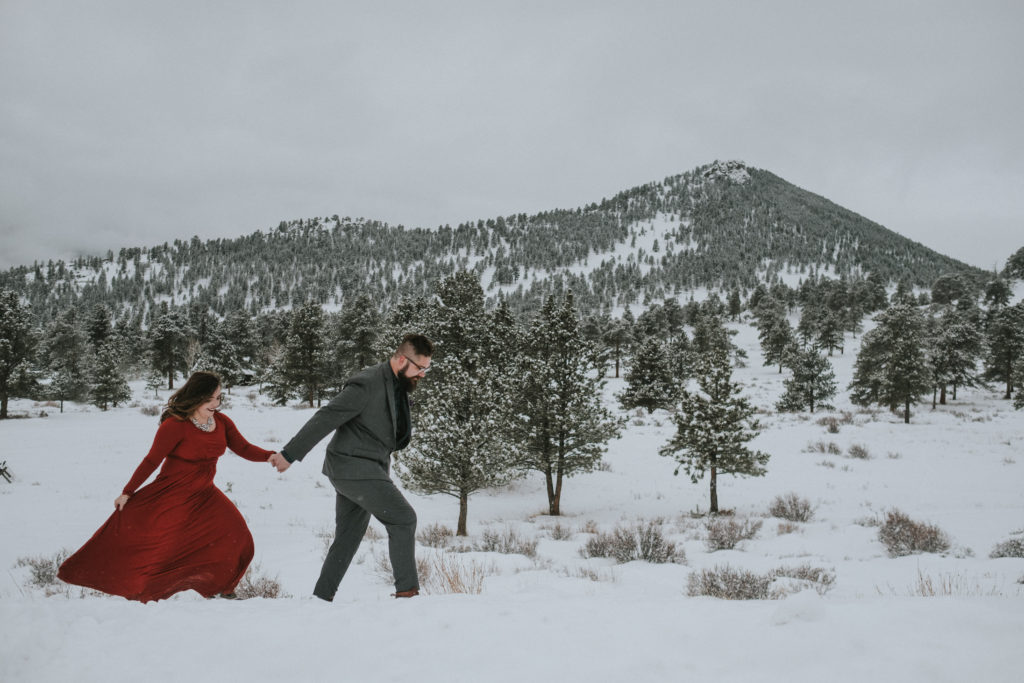 I got this dress from Amazon for $60!

1.) Go in ready to show your personality.

Truth be told, I’ve been known to hate on an engagement photo or two. “Let’s stand with the skyline in the background!” “Look there’s a swarm of forest creatures following us!” “Our lives are so magical and every day is so perfect!” While a true representation of Ronny and me would be us on our phones, feet on the table, surrounded by dogs, instead we ventured out with Hartman Outdoor Photography for and adventure engagement session at Rocky Mountain National Park. A huge part of our relationship has been travel, so it felt natural to jet to Colorado for both a mini vacation and for some photos together. 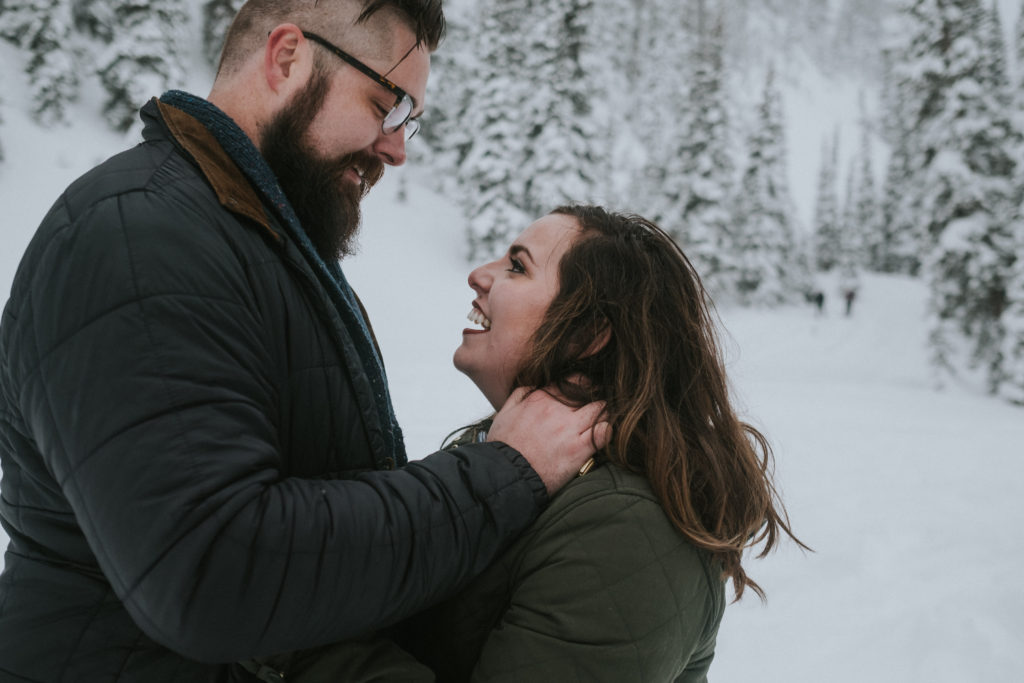 When we arrived, there was no snow in Boulder. Everything was barren and we thought we’d end up having a 54 degree day. We were wrong. The night before the shoot the area got about eight inches of snow, and the mountains got several feet. Annnnd, we had rented a hatchback Ford Focus. Yikes. Luckily, we had Shelley and Josh Hartman. Shelley and Josh are quality people and quality photographers. (You know those people who are endlessly positive and radiate authenticity? That’s Shelley and Josh. If you can hire them for anything – even just taking sweet pictures of you and your boo – do it.) Shelley and Josh carted us up the mountains in their truck, complete with chains. It was very sweet and badass.

Ronny and I planned on doing two outfits for photos – one formal and one how we ACTUALLY dress. Underneath that red dress ($60 from Amazon!) I wore huge Sorel boots and leggings. We changed clothes in the visitor’s center bathroom. I wanted to bail on this idea at the last minute, but am so glad we didn’t because of the epic pictures. Even in the snowy mountains, it’s fun to feel glamorous. We shot with these looks first, so I recommend doing the fancy ones first to get them out of the way, especially if you’re trudging through feet of snow like we were. 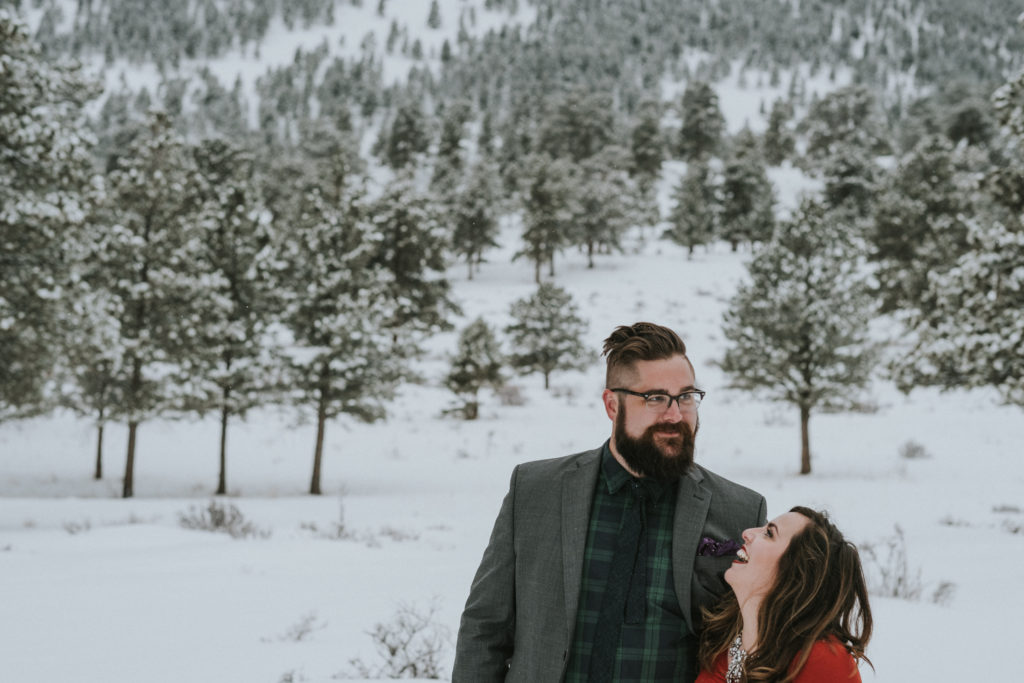 There are all kinds of things I can complain about on my body. My arms look weird, my hair is messed up, that shirt is wrinkled. But literally no one will notice these things but you. Don’t be the bride who nitpicks every detail of the shoot, and don’t stay up late on your cell phone looking at the pictures and vowing to change parts of your body. (I totally did that, and I wasted like 30 minutes of actual sleep over a couple photos despite the huge majority of the photos making me look amazing!) You’re beautiful. You are so happy. Everything is awesome. 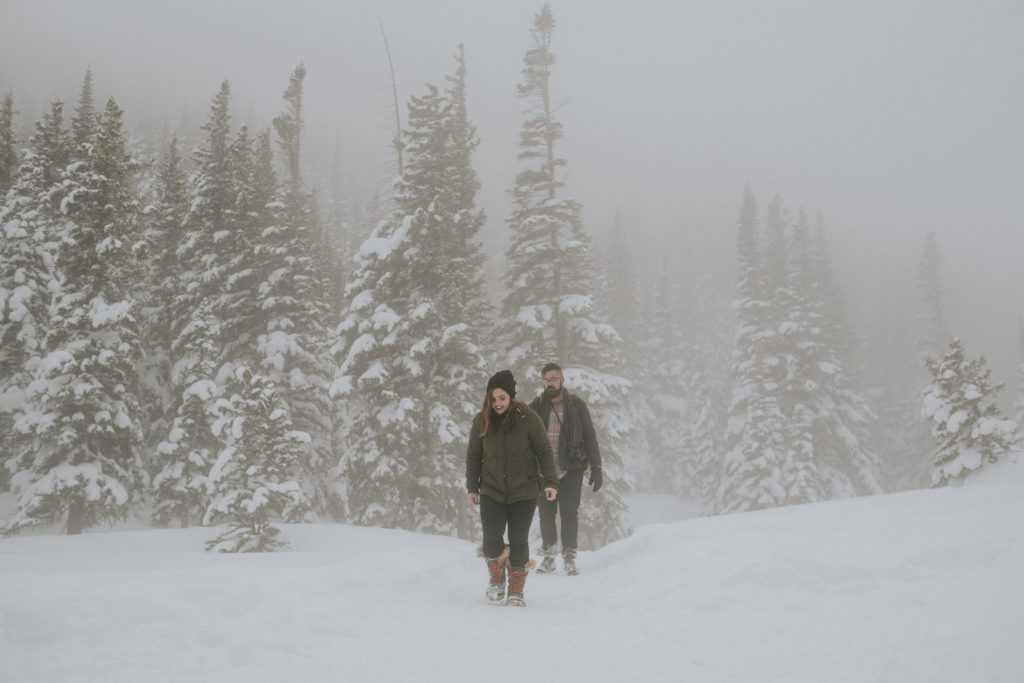 Another awesome thing Shelley and Josh did – they brought champagne. We hiked in super deep snow and they carried champagne! I mean who is that kind?! We had a bottle at the beginning of the session and another midway through. It’s an awesome way to loosen up and get excited that, oh shit, you’re actually getting married! 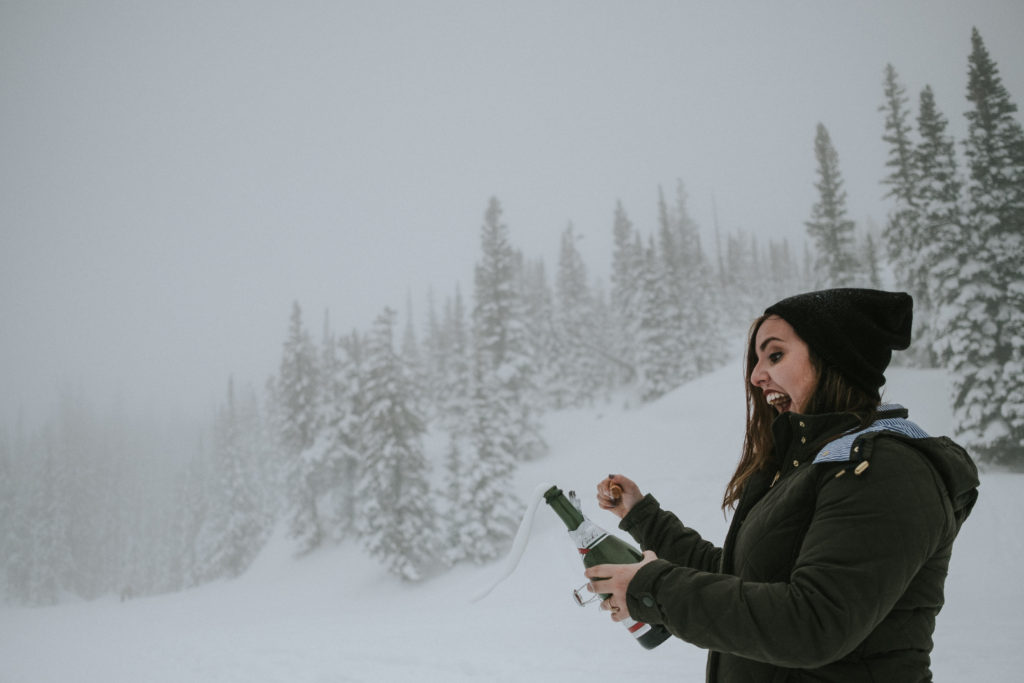 4.) Take lots of your own photos too.

Whether it’s a cell phone or your camera, make sure to document the process too. It’s fun to remember what everything was like from your side of the lens. Don’t forget to take videos, too!

Holy. Smokes. 🗻Today @ronnyhasabeard and I had the most epic engagement photo session with @hartmanoutdoorphotography. What you can’t see from this short video is we are standing on a frozen lake covered in several feet of snow, everything looks like Narnia, and we were drinking champagne in the mountains. I’m the girl who laughs about the awkwardness of engagement pictures – let me tell y’all, I am confident ours will look nothing like the cliché. It was one of the top 10 best days ever. 🤵🏻👰🏻#nofilter

I am not a romantic. I am not one for kissing in public or holding hands or even looking like we are anything other than best buds. But when you’re getting your engagement photos taken, embrace the romance. Embrace the fact that you’re somewhere awesome (even if it is a bridge in your hometown that everyone gets their photos taken at, literally, who cares) with someone who loves you and wants to spend the rest of their life with you. Like, that’s some seriously romantic shit. Cast aside your self-doubt and awkwardness (the champagne seriously helps), and just be in love. We don’t take enough time to do this in our daily lives, so after the shoot, try to have a moment to just be in love more often. 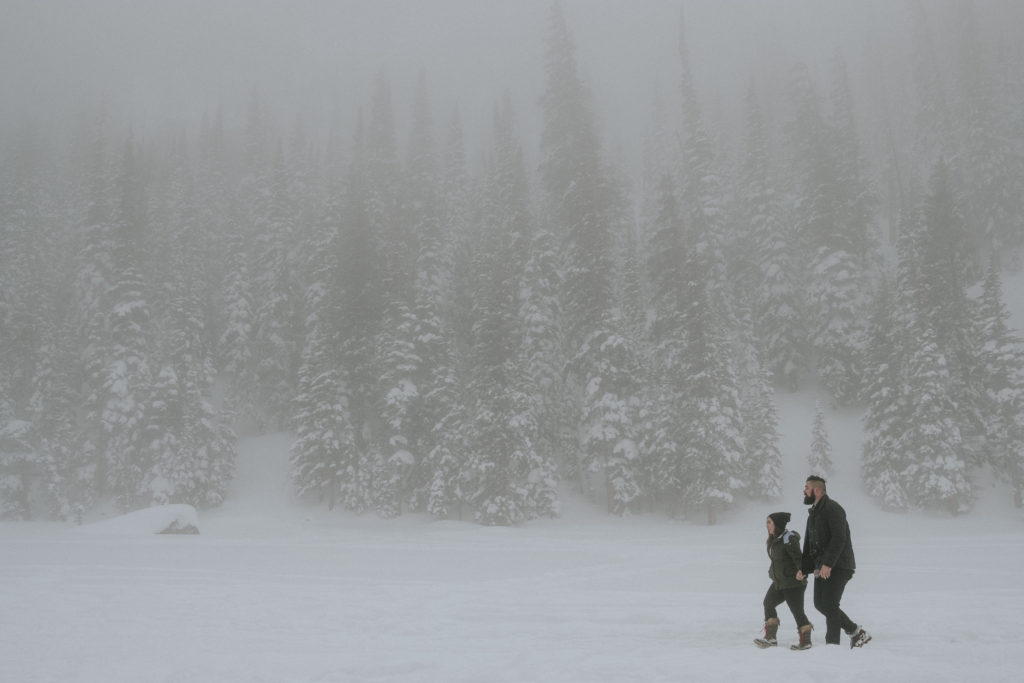 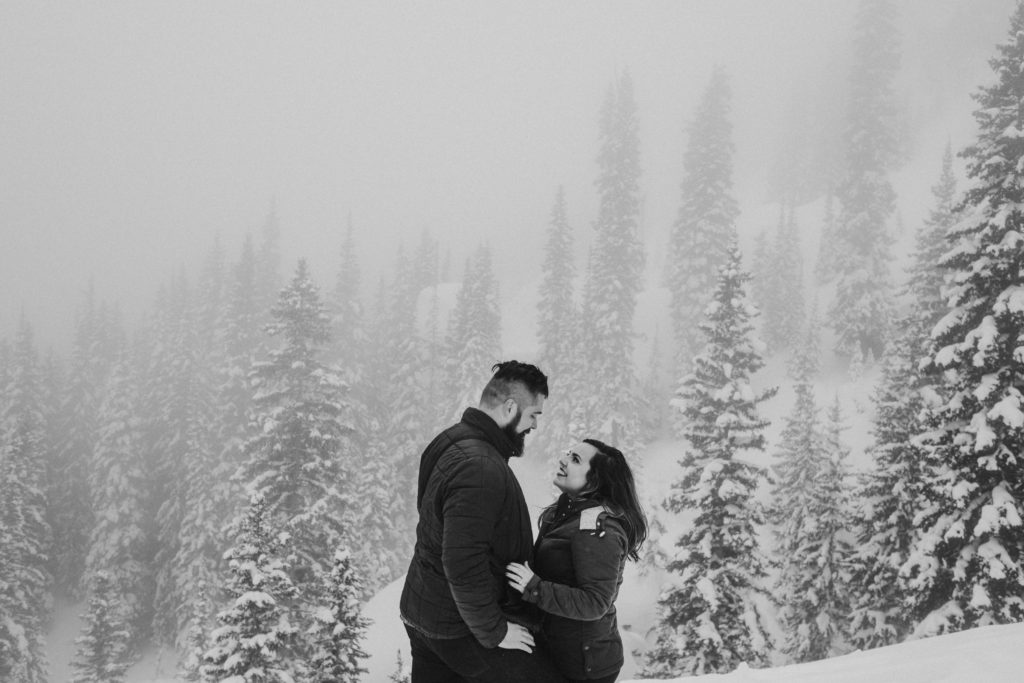 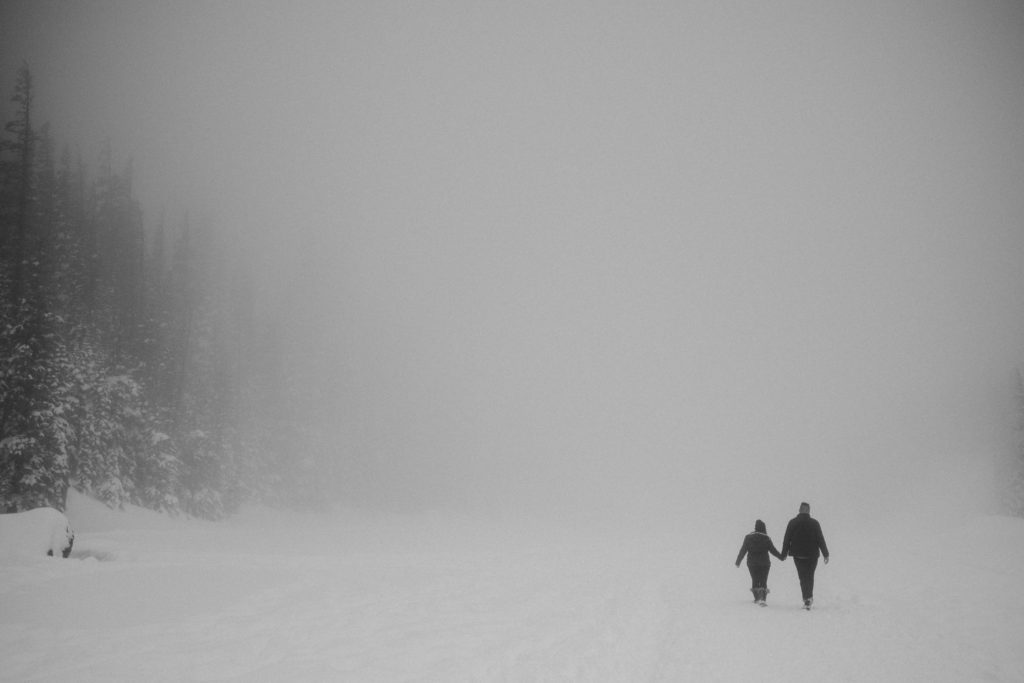 What are your pro-tips for engagement photo taking? Leave your comments below!