10 Best Rap Songs of All Time 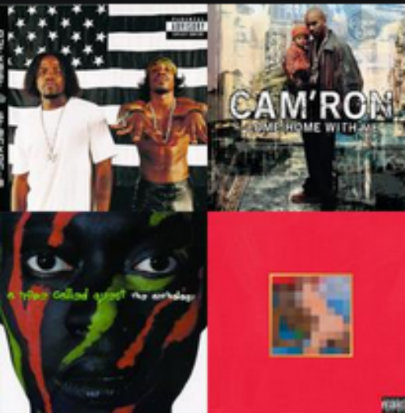 I remember bobbing around to this song in middle school feeling cool as hell, and now I’m listening to it like “Damn, this isn’t about partying and booty-shakin’. This is about childcare and custody and REAL LIFE ISSUES.” Also, if you haven’t said “Forever, forever, forever-ever, forever-ever?” at least once in your life, you’re doing it wrong.

Obviously the high-point of Freekey Zeekey’s career. Why do I love this song? Because it’s classic. No one in it is insanely talented, it’s just good. When this song comes on people aren’t like, “Oh, this blows, I better change this.” They’re like “Oh man, I forgot who sang this song but it’s tight as hell.” Thanks Freekey Zeekey.

The sickest beat in a song of all time. Don’t try to argue with me. (I mean you can, but you won’t change my mind.)

My go-to song for when I’m feeling like a bad betch, let’s be real, Nicki Minaj’s verse makes this whole song. Granted, Nicki doesn’t show up in any of my other top rap songs (because most of her shit sucks), but this verse feels like Tim Tebow’s rookie year at Florida. She nails it here, but afterward? Ehhhh…

“Look At Me Now” by Busta Rhymes & Lil Wayne

What? There’s someone else on this track? Yeah, not in my book. Lil Wayne even phones this one in (his verse isn’t HORRIBLE, but I’m pretty sure he was drunk in it) compared to Busta Rhymes, who SLAYS. “ajkfakjdjioijijjajhkdfjh” – me trying to record what the hell he just rapped.

Why don’t Jay and Kanye have their own boy band? Their album together is 100 times better than the stuff they create alone, so if we could make some Kris Kross thing happen, that’d be great.

This is the song that made me fall in love with Kendrick Lamar. I have extremely high hopes for him and I’m still confused why that white guy with the annoying hair cut won all those Grammys. I literally forgot his name.

“A Milli” by Lil Wayne

This is probably my most debatable selection on here. This song isn’t particularly amazing, but when you turn the bass in your car already up and roll your windows down, its badassness multiplies by 10.

If I could make Childish Gambino/Donald Glover every song in this list, I would. If Childish Gambino and Kendrick Lamar could combine into one power rapper of sheer dominance, the rap world would explode. And I would be a fiery ball of corpse, but I’d still be happy about it.

Okay, what rap song did I miss?